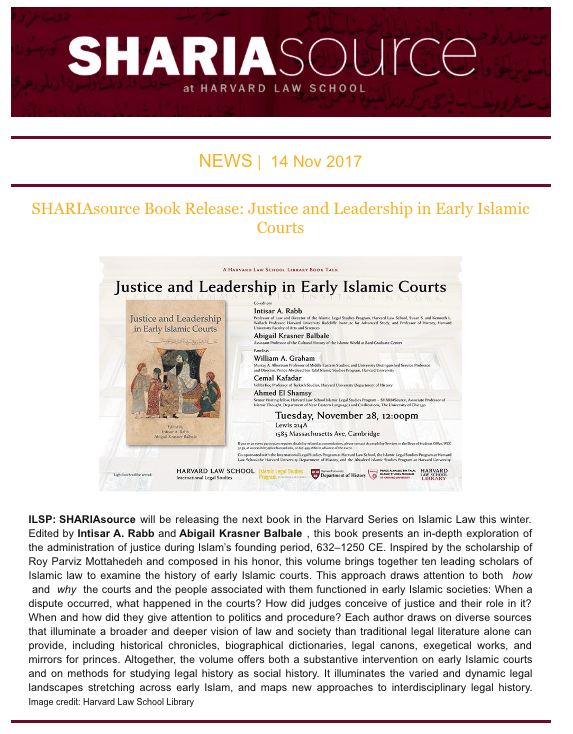 SHARIAsource Book Release: Justice and Leadership in Early Islamic Courts ILSP: SHARIAsource will be releasing the next book in the Harvard Series on Islamic Law this winter. Edited by Intisar A. Rabb and Abigail Krasner Balbale , this book presents an in-depth exploration of the administration of justice during Islam’s founding period, 632–1250 CE. Inspired by the scholarship of Roy Parviz Mottahedeh and composed in his honor, this volume brings together ten leading scholars of Islamic law to examine the history of early Islamic courts. This approach draws attention to both  how and  why  the courts and the people associated with them functioned in early Islamic societies: When a dispute occurred, what happened in the courts? How did judges conceive of justice and their role in it? When and how did they give attention to politics and procedure? Each author draws on diverse sources that illuminate a broader and deeper vision of law and society than traditional legal literature alone can provide, including historical chronicles, biographical dictionaries, legal canons, exegetical works, and mirrors for princes. Altogether, the volume offers both a substantive intervention on early Islamic courts and on methods for studying legal history as social history. It illuminates the varied and dynamic legal landscapes stretching across early Islam, and maps new approaches to interdisciplinary legal history. Image credit: Harvard Law School Library

Codifying Polygamy in the 1957 Moroccan Mudawwana Earlier this year, Tunisia lifted the 1973 ban on Muslim women marrying non-Muslim men and is considering equalizing inheritance laws for men and women, on arguments based on the post-Arab Spring 2014 constitution calling for gender equality. This development follows in a line of earlier precedent for personal status code reforms, and the recent actions beg the question about comparative practice based on modern interpretations of Islamic law or Mālikī law. For perspective on both, student editor Ari Schriberdiscusses Morocco’s 1957 Personal Status Code as the country’s first unified set of family law statutes. Read more. Image Credit: Wikipedia

Sharifian Decree of 1957 – The Mudawwana : Law of Personal Status This section of  Morocco’s Official Gazette, al-Jarīda al-Rasmiyya , officially promulgates the first two books of the Moroccan Personal Status Code, the  Mudawwana . The first book presents the stipulations concerning marriage, including issues such as the contract, dowry, and inhibitors (like number of wives). The second book deals with the dissolution of marriage, thus addressing conditions of repudiation, women’s repudiation, and the  ʿidda (the woman’s waiting period until she may remarry).   Read more. Image Credit: Wikipedia