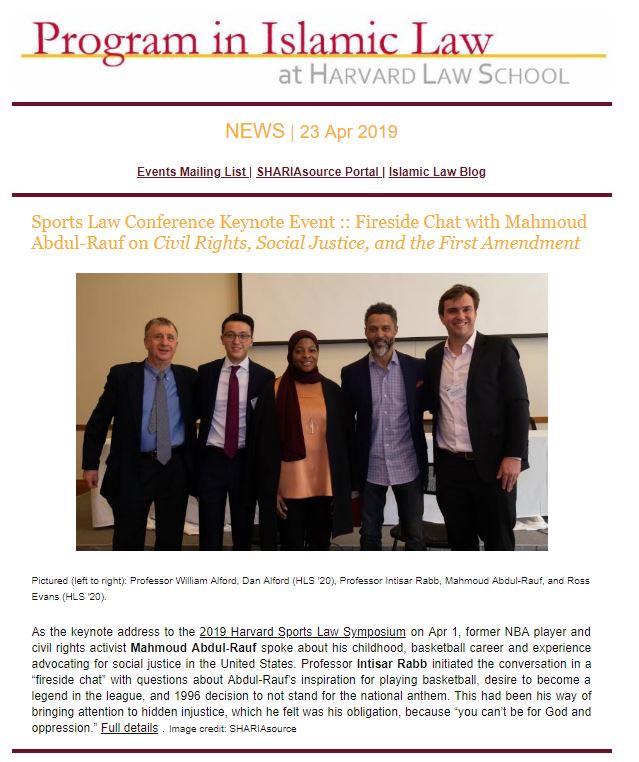 Sports Law Conference Keynote Event :: Fireside Chat with Mahmoud Abdul-Rauf on Civil Rights, Social Justice, and the First Amendment  As the keynote address to the 2019 Harvard Sports Law Symposium on Apr 1, former NBA player and civil rights activist Mahmoud Abdul-Rauf spoke about his childhood, basketball career and experience advocating for social justice in the United States. Professor Intisar Rabb initiated the conversation in a “fireside chat” with questions about Abdul-Rauf’s inspiration for playing basketball, desire to become a legend in the league, and 1996 decision to not stand for the national anthem. This had been his way of bringing attention to hidden injustice, which he felt was his obligation, because “you can’t be for God and oppression.” Full details. Image credit: SHARIAsource

Spotlight on Andalusian Legal History :: The 11th-Century Toledan Heresy Trial and the Right of the Accused to Challenge Witnesses Maribel Fierro  examines 11th-century  reports   of a  case in which “a Toledan man named Ibn Ḥātim was accused of being a heretic by sixty witnesses on the initiative of a fellow Toledan called Ibn Labīd al-Murābiṭ.”  At the time, Muslim-ruled  petty  kingdoms (mulūk al-ṭawāʼif )  were still reverberating from the shock of Barbastro’s fall into Christian hands , and felt anxious about  a Christians’ military threat.   When the accusation came before him, the judge consulted with local jurists and eventually sentenced  the accused to death —but not without ensuring some legal process before the sentence could be carried out. The case proceeded as follows: The judge “ granted the accused the right to challenge the witnesses ( iʿdhār ). Ibn Ḥātim escaped from Toledo and found refuge in the neighboring kingdom of Badajoz. Ibn Labīd went after him, carrying a copy of the judge’s sentence ( tasjīl ) along with the legal opinions of a number of non-Toledan jurists. In Badajoz, the ruler withdrew his support from Ibn Ḥātim, who fled again, this time to Cordoba. While in Cordoba, the ‘moral’ police arrested Ibn Ḥātim, and the judge imprisoned him, giving him two months to prove his innocence. Unable to do so, Ibn Ḥātim was crucified alive.” Fierro supposes  that the arguments against Ibn Ḥātim — a man whose reputation was once so excellent  that  he himself  was asked to testify about the reliability of  other  witnesses ( tazkiya ) — were influenced by the fraught political climate. “Disagreements between [scholarly Toledan] factions may have extended beyond the acceptance or rejection of the non-Islamic sciences to include disputes over social, economic, and political issues, especially concerning the relationship with nearby Christian powers.”  The proceedings of this politically-tinged case raises  several questions of law:  should the right to challenge witnesses accrue to those accused of heresy? Should others grant refuge to those so accused? How should officials dispose of the estate or inheritance of someone executed for heresy? Can  one  judge vacate or reverse a sentence  handed down  by another judge?  For discussion of these and other questions, read the full analysis. Image credits: Google Earth/Luis Molina and Víctor de Castro

SOURCE :: Two Fatāwā on Ibn Ḥātim’s Charge of Heresy In his case against  Ibn Ḥātim, Ibn Labīd asked the resident jurists of five towns  in medieval al-Andalus  their opinions on Ibn Ḥātim’s  heresy charge .  The five questions were as follows:  “1) Should the judge grant Ibn Ḥātim the option to challenge the witnesses ( iʿdhār )? 2) Might Ibn Ḥātim challenge the witnesses on the grounds that there was a prolonged time-gap between his alleged heretical expression and their testimony against him in court? 3) Who could inherit Ibn Ḥātimʼs property [were he convicted for heresy]? 4) Did Ibn Ḥātimʼs flight from Toledo legitimate the confiscation of his inheritance for the public treasury ( bayt al-māl ) prior to his execution? 5) Was it legal to provide Ibn Ḥātim refuge?”  Maribel Fierro  provides an overview of two opinions (fatāwā) : those of  Ibn ʿAttāb and Ibn al-Qaṭṭān , alongside discussion of the related judicial procedures in Córdoba. Read the fatāwā and proceedings. Image credit: Fanack.com