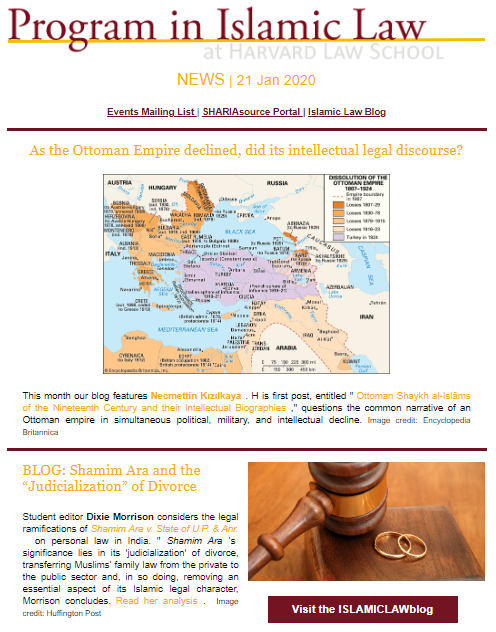 As the Ottoman Empire declined, did its intellectual legal discourse? This month our blog features Necmettin Kızılkaya. His first post, entitled “Ottoman Shaykh al-Islāms of the Nineteenth Century and their Intellectual Biographies,” questions the common narrative of an Ottoman empire in simultaneous political, military, and intellectual decline. Image credit: Encyclopedia Britannica

SHARIAsource PORTAL: Online Companion to Malik’s Muwa ṭṭ aʾ Just launched on the SHARIAsource Portal is an Online Companion to the Book, al-Muwaṭṭaʾ – Recension of Yaḥyā b. Yaḥyā (d. 234/848). The Online Companion includes historical maps of principal cities of the Umayyad empire where the text originated and spread from Mecca and Medina to the Maghreb and al-Andalus. Readers of the Muwaṭṭaʾ can also link the work to its greater context through links to the online roundtable’s ten expert commentaries, read biographies of historical figures, and compare Arabic to English excerpts of the text. Stay tuned for the full Arabic and English text, to be posted! Image credit: SHARIAsource/Program in Islamic Law

BLOG: What is dark matter in Early Islamic Law? This month our blog features Marion Katz , who references Jack Tannous’ “recent book The Making of the Medieval Middle East (Princeton University Press, 2018)” to discuss the importance of “be[ing] vigilant for f leeting glimpses of the interpretive activities of ordinary Muslims” in Late Antiquity Christianity and early Islam. These activities are the “dark matter” of Islamic law because ” the lives of [ordinary] unlearned people accounted for the great bulk of the religious experiences of the past but are rarely directly represented in our sources.” Check out all of Marion Katz’s posts . Image credit: Phys.org