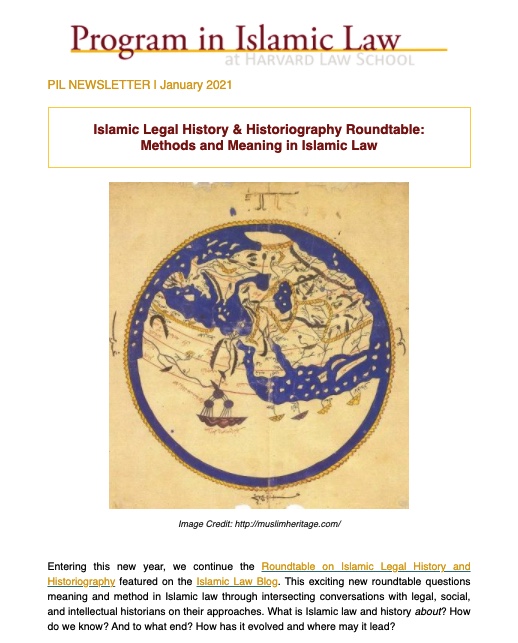 Islamic Legal History & Historiography Roundtable: Methods and Meaning in Islamic Law Entering this new year, we continue the Roundtable on Islamic Legal History and Historiography featured on the Islamic Law Blog. This exciting new roundtable questions meaning and method in Islamic law through intersecting conversations with legal, social, and intellectual historians on their approaches. What is Islamic law and history about? How do we know? And to what end? How has it evolved and where may it lead?

In particular consideration are some of the following questions: What have been the most significant methodological and historical developments in the field of Islamic law over the past two decades? How have mainstream and critical approaches from fields in the humanities and social sciences informed the study of Islamic law? How has data science – the use of quantitative methods and digital technologies – impacted the field or promised to shape the future of the field?

Visit the Islamic Law Blog for new posts throughout January and to participate in the February live Zoom virtual event. All publications and events are public and of open digital access.

CONTENT:  Islamic Law Blog Top Five ʾAs we say goodbye to 2020, we reflect back on the Islamic Law Blog‘s most popular posts! Professor Ahmed El Shamsy leads us with his post, “How not to reform the study of Islamic law: A response to Ayesha Chaudhry,“ also featured in our current roundtable series on Islamic legal history and historiography. Akhila Kolisetty follows with her 2017 post, “Commentary: The Danial Latifi Case and the Indian Supreme Court’s Balancing Act,“ one of our most popular posts for a few years running. PIL Faculty Director, Intisar Rabb’s introduction to the current roundtable series, “Methods and Meaning in Islamic Law: Introduction,” continues to gain traction with the roundtable currently underway. The 2016 post by Esther Agbaje, “Debt and Bankruptcy in Classical Islamic Law,” also continues to garner popular attention. Last, but certainly not least, is “Against ‘flattening the [curve of] diversity of approaches’ to Muslim understandings of contagion in a time of pandemic,” by Justin Stearns. We look forward to the many exciting posts and guest editors lined up for 2021!

CONTEXT:  PIL Book Talk Webinar  In our Islamic Law Speaker Series, Nathan Spannaus of University of Jyväskylä discussed  his new book, Preserving Islamic Tradition: Abu Nasr Qursawi and the Beginnings of Modern Reformism (Oxford University Press, 2019), which analyzes Abu Nasr Qursawi’s reformism within the Russian empire, referencing its antecedents and sources in light of many historical shifts. He argues that Qursawi’s reformism was grounded within the existing scholarly tradition and its content was not subject to European influence. However, his reformism is perceived as a response to the incorporation of Islamic institutions into the bureaucracy of the Russian imperial state in the late 18th century, remaking the exercise of Islamic law and religious authority in the empire. Through this analysis, Spannaus ultimately argues that although Qursawi’s reformism is grounded in the postclassical tradition, it is also an early example of Islamic modernism. Moderated by Program in Islamic Law Research Fellow Sohaib Baig, view the full webinar with English subtitles on the PIL website and Vimeo channel.