Experiments in Tracking Canons across the Mecelle [Ottoman Code of 1869]  Last term, we convened CnC Research Working Group to bring together a global group of scholars interested in interpretation in Islamic law to share works in progress, read texts, and discuss new ideas on research questions relevant to the history of interpretation, courts, and canons. One aim was to better understand legal canons as tools for interpretation in historical context. A second aim was to see whether and how data science tools can augment that process. To those ends, we meet to workshop works-in-progress deliberately designed to be ‘half-baked ideas’ at the preliminary stages of research. We experiment with ways in which data science tools of the type we are developing at SHARIAsource (CnC Qayyim) can aid in that research. Case in point: our most recent workshop on the Ottoman Code of 1869, better known as the Mecelle. Professor Intisar Rabb and PIL Data Science Fellow, Dr. Yusuf Celik, explored debates over how and why the Mecelle Drafting Committee borrowed 99 legal canons to reform Ottoman law. They and the Research Group raised several questions: By looking at patterns of canons clusters that the CnC tools helped produce, what conclusions can we form about why the Mecelle scholars made certain choices over others for which canons to include in their short list of 99 legal canons? If tracking canons across texts, how extensive would a corpus need to be to definitively answer the questions posed? What types of sources would add greater insight into applications of those canons in late-Ottoman law and society? Together, we worked through the clustering of canons in the ‘Mecelle Flow,’ highlighted in the image above. The authors will go back to the digital drawing board to further develop the tools and prepare a paper to publish the results. Read more here, and stay tuned for findings and a dedicated site of the digital tools for you to compare canons and explore the Mecelle flow for yourself! 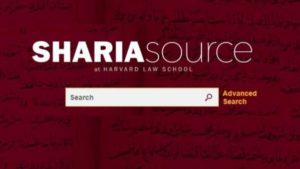 CONTENT: Family Law in Pakistan One aim of SHARIAsource is to provide access to primary and secondary sources of Islamic law to support research on salient issues of Islamic law and history. Professor Zubair Abbasi‘s recently added the two new amendments in sections 4 and 7 of the Muslim Family Laws Ordinance 196 introduced by the National Assembly in Pakistan late last year. Both of these amendments relate to Shīʿī law (Fiqh-e-Jafaria). The first amendment provides that a childless widow of a Shīʿī husband has inheritance rights in immovable property. The second amendment clarifies the Shīʿī law on ṭalāq (divorce), requiring that the husband pronounce an Arabic formula for it in the presence of two witnesses to make divorce effective. This amendment further provides that a ṭalāq pronouncement shall not be effective if uttered “jokingly or under anger, intoxication, insanity, duress or coercion of any kind”. Both amendments provide that in cases of dispute, the parties may have recourse to “a court of competent jurisdiction or by approaching the Mujtahid-e-Alam from the panel maintained by the Council of Islamic Ideology.” Explore this updated legislation directly on the SHARIAsource Portal and, for more context on Islamic family laws in Pakistan, check out Professor Abbasi‘s posts on the Islamic Law Blog. CONTEXT: Fellow Spotlight As Our Fellow Spotlight series features interviews with current and previous PIL Fellows, highlighting their work with the Program, their path getting here, and the road going forward. This month we featured last year’s PIL Research Fellow, Dr. Sohaib Baig. Dr. Baig is currently the Librarian for Middle Eastern, North African, South Asian, and Islamic Studies at UCLA.His research examines how the Sunni madhhab system made it possible for  Indian Ḥanafī scholars to travel and engage in a wide array of transactions across such a politically vast and heterogenous space, with inter- and intra-madhhab exchanges. He is also interested in the history of Qur’ānic scholarship in South Asia, and its role in constructing Islamic law in in the region. At Harvard, he worked on his book project on Islamic legal and ḥadīth scholarship in South Asia and the Hijaz from the 16th century to the early 20th century. During his time at PIL, he also was involved in our SEARCHstrata project, which is an advanced library search tool in collaboration with the Harvard Law School Library and the Library of Congress. To find out more about his path to becoming a Research Fellow at the Program in Islamic Law, his work during his time at Harvard, what he is up to now, and what he likes to do for fun on our blog!