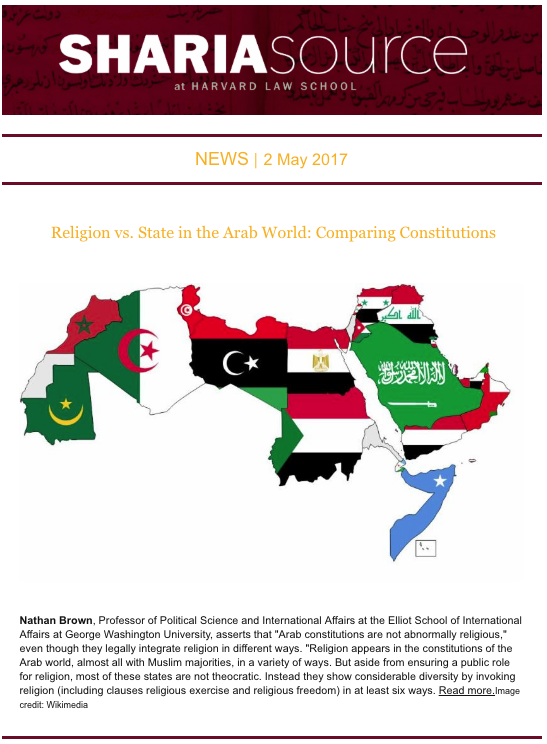 Religion vs. State in the Arab World: Comparing Constitutions Nathan Brown, Professor of Political Science and International Affairs at the Elliot School of International Affairs at George Washington University, asserts that “Arab constitutions are not abnormally religious,” even though they legally integrate religion in different ways. “Religion appears in the constitutions of the Arab world, almost all with Muslim majorities, in a variety of ways. But aside from ensuring a public role for religion, most of these states are not theocratic. Instead they show considerable diversity by invoking religion (including clauses religious exercise and religious freedom) in at least six ways. Read more. Image credit: Wikimedia

RESOURCES: Country Profiles on Islamic Law SHARIAsource’s resources now include country profiles! These profiles outline the contemporary legal landscape, and the status of Islamic law within each, of the countries and major regions of the world. For example, Bahrain’s Country Profile  includes its  constitution and other sources in Arabic and English to help users conduct research or contextualize analyses about Islamic law in that country.  Image credit: National Geographic

EVENT:: The Transformation of Anglo-Muhammadan Law: Muslims on British Benches On April 25th, SHARIAsource Fellow, Dr. Sohaira Siddiqui, at the Islamic Legal Studies Program used the 1881 case of Fidayat ul-Nissa and others  v. Muhammad Ismail Khan (India) to frame her discussion of the creation of Anglo-Muhammadan law. Like the other five cases that she has researched during her fellowship this year, this case  demonstrates the complexity of this hybrid legal system that combined British law with Islamic law in helping to usher on modern models of Islamic law in nation states today. Image credit: Darrick Northington