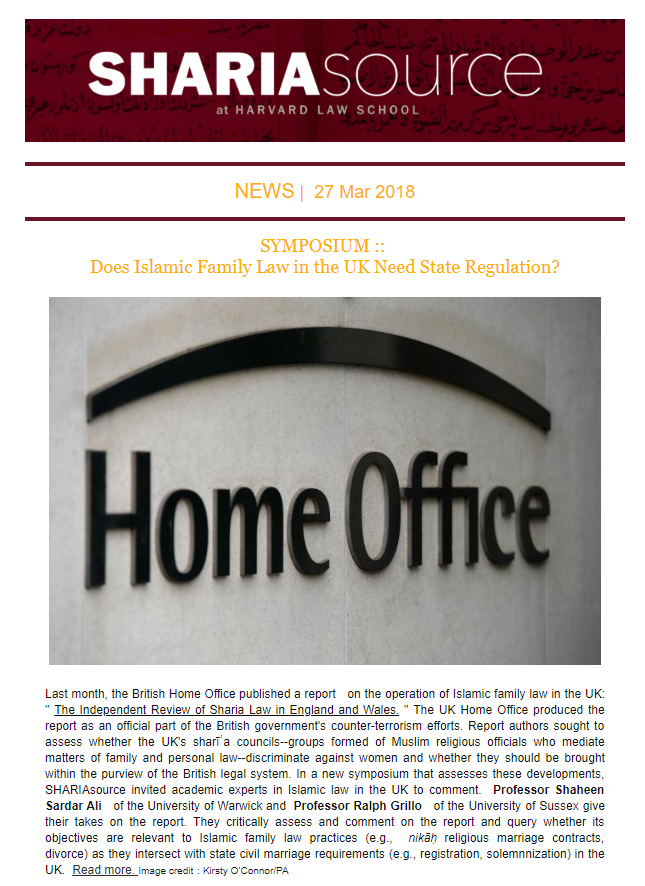 SYMPOSIUM :: Does Islamic Family Law in the UK Need State Regulation? Last month, the British Home Office published a report   on the operation of Islamic family law in the UK: ” The Independent Review of Sharia Law in England and Wales. ” The UK Home Office produced the report as an official part of the British government’s counter-terrorism efforts. Report authors sought to assess whether the UK’s sharīʿa councils–groups formed of Muslim religious officials who mediate matters of family and personal law–discriminate against women and whether they should be brought within the purview of the British legal system. In a new symposium that assesses these developments, SHARIAsource invited academic experts in Islamic law in the UK to comment.  Professor Shaheen Sardar Ali   of the University of Warwick and  Professor Ralph Grillo   of the University of Sussex give their takes on the report. They critically assess and comment on the report and query whether its objectives are relevant to Islamic family law practices (e.g.,  nikāḥ religious marriage contracts, divorce) as they intersect with state civil marriage requirements (e.g., registration, solemnization) in the UK. Image credit : Kirsty O’Connor/PA

CASE :: The Prosecution of an Unregistered Married Couple in Aceh, Indonesia The distinction between state law and religious law remains administratively murky in many countries, including in the Muslim world. Student editor Waskito Jati  illustrates how a current case in Aceh, Indonesia, exemplifies the problems that result from poorly defined laws. In this case, a couple’s marriage was deemed illegitimate because it had not been registered with the civil were accused of “committing  khalwat  (Ar. khalwa , the act of being in a secluded place between unmarried man and woman)”–a new crime specified by the Islamic Criminal Code in Aceh. Aceh still uses the secular Indonesian Marriage Law of 1974 in determining the legitimacy of a marriage, under which the couple would not have been subject to criminal charges even if their marriage was not registered, which was the basis for the conclusion of illegitimacy. This case exemplifies the dangers of new Islamic criminal law codes, especially where they attach criminal consequences to family matter. Image credit: Wikimedia Commons