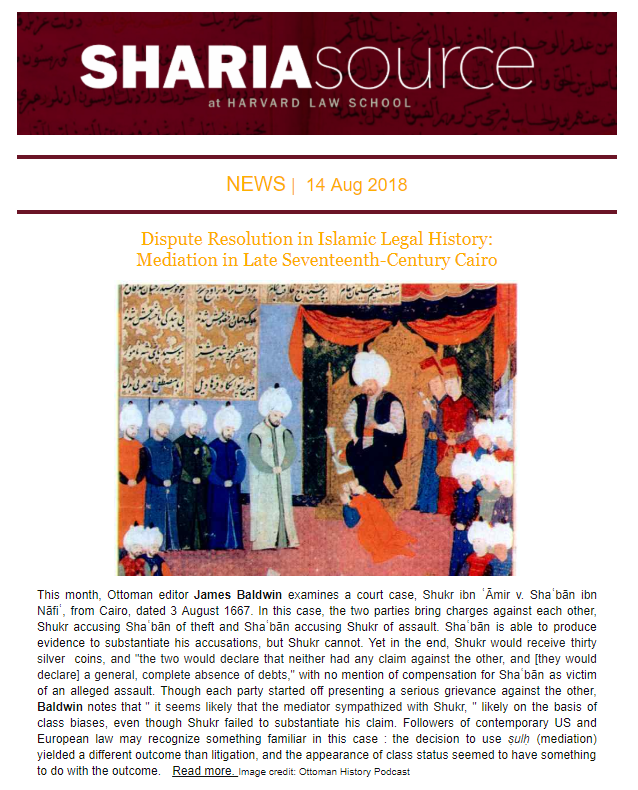 Dispute Resolution in Islamic Legal History: Mediation in Late Seventeenth-Century Cairo This month, Ottoman editor James Baldwin examines a court case, Shukr ibn ʿĀmir v. Shaʿbān ibn Nāfiʿ, from Cairo, dated 3 August 1667. In this case, the two parties bring charges against each other, Shukr accusing Shaʿbān of theft and Shaʿbān accusing Shukr of assault. Shaʿbān is able to produce evidence to substantiate his accusations, but Shukr cannot. Yet in the end, Shukr would receive thirty silver  coins, and “the two would declare that neither had any claim against the other, and [they would declare] a general, complete absence of debts,” with no mention of compensation for Shaʿbān as victim of an alleged assault. Though each party started off presenting a serious grievance against the other,Baldwin notes that ” it seems likely that the mediator sympathized with Shukr, ” likely on the basis of class biases, even though Shukr failed to substantiate his claim. Followers of contemporary US and European law may recognize something familiar in this case : the decision to use ṣulḥ (mediation) yielded a different outcome than litigation, and the appearance of class status seemed to have something to do with the outcome.   Read more. Image credit: Ottoman History Podcast

Shukr b. ʿĀmir v. Shaʿbān b. Nāfiʿ: (Ottoman Cairo 1667) In this court record from Ottoman Cairo, dated 3 August 1667, two connected disputes are resolved by ṣulḥ (mediation) rather than litigation. Shukr b. ʿĀmir accuses Shaʿbān b. Nāfiʿ of theft, while Shaʿbān accuses Shukr of assault. Shukr fails to provide evidence to substantiate his claim, while Shaʿbān provides two witnesses for his claim. If the dispute had been adjudicated, the judge would have dismissed Shukr’s claim of theft and held him liable for the assault. However, the litigants chose to enter mediation, which resulted in a very different settlement: Shaʿbān was ordered to make a modest payment to compensate Shukr for the alleged theft but dropped his claim of assault.  Read more.  Image credit: Encylopedia Britannica

SHARIAsource New Feature :: Special Collection: Country Profiles Under the direction of Library Editor Aslihan Bulut, SHARIAsource has rolled out a new resource that presents Islamic law profiles of every country of the world. Each Country Profile provides a basic overview of the legal history, institutional structures, and role (or lack thereof) of Islamic law in each country: divided according to member countries of the  Organisation of Islamic Cooperation, which includes some non-Muslim-majority countries,  and non-members. This collection of Country Profiles was developed in collaboration with or draw s in substantial part on research produced by the  Library of Congress , GlobaLex  at NYU, and  The Constitute Project  at the University of Chicago.   Read more.  Image credit: The Indian Express