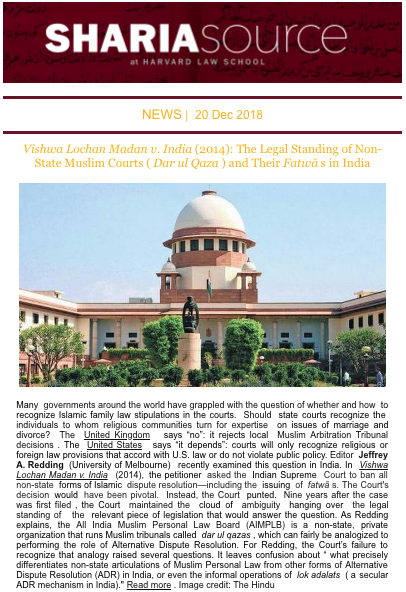 Vishwa Lochan Madan v. India (2014): The Legal Standing of Non-State Muslim Courts (Dar ul Qaza) and Their Fatwās In India Many governments around the world have grappled with the question of whether and how  to recognize Islamic family law stipulations in the courts. Should state courts recognize the individuals to whom religious communities turn for expertise  on issues of marriage and divorce? The United Kingdom says “no”: it rejects local Muslim Arbitration Tribunal decisions. The United States says “it depends”: courts will only recognize religious or foreign law provisions that accord with U.S. law or do not violate public policy. Editor  Jeffrey A. Redding  (University of Melbourne)   recently examined this question in India. In Vishwa Lochan Madan v. India (2014), the petitioner  asked the  Indian Supreme  Court to ban all non-state  forms of Islamic dispute resolution—including the  issuing  of  fatwās. The Court’s decision  would  have been pivotal.  Instead, the Court  punted.  Nine years after the case was first filed, the Court maintained the cloud of  ambiguity  hanging over  the legal standing of   the  relevant piece of legislation that would answer the question. As Redding explains, the All India Muslim Personal Law Board (AIMPLB) is a non-state, private organization that runs Muslim tribunals called dar ul qazas, which can fairly be analogized to performing the role of Alternative Dispute Resolution. For Redding, the Court’s failure to recognize that analogy raised several questions. It leaves confusion about “what precisely differentiates non-state articulations of Muslim Personal Law from other forms of Alternative Dispute Resolution (ADR) in India, or even the informal operations of  lok adalats  ( a secular ADR mechanism in India).” Read more. Image credit: The Hindu

LEGISLATION: Malaysian Law on Local Fatwā s as Law In Malaysia, state officials passed The Administration of the Religion of Islam (State of Selangor) Enactment  in  2003,  establishing a fatwā-legalization process. The law also outlines the role of the muftī as chairman of Selangor’s state fatwā committee. As the main piece of legislation governing Selangor’s sharīʿa (Bahasa: Syariah) courts, Islamic finance  practices , and conversions  to Islam, the law serves as umbrella legislation for  Islamic  practices that  the state wishes to regulate. Full text and summary, by student editor Alizeh Ahmad. Image credit: Public domain/Selangor government